Algae as bioresource in circular bioeconomy 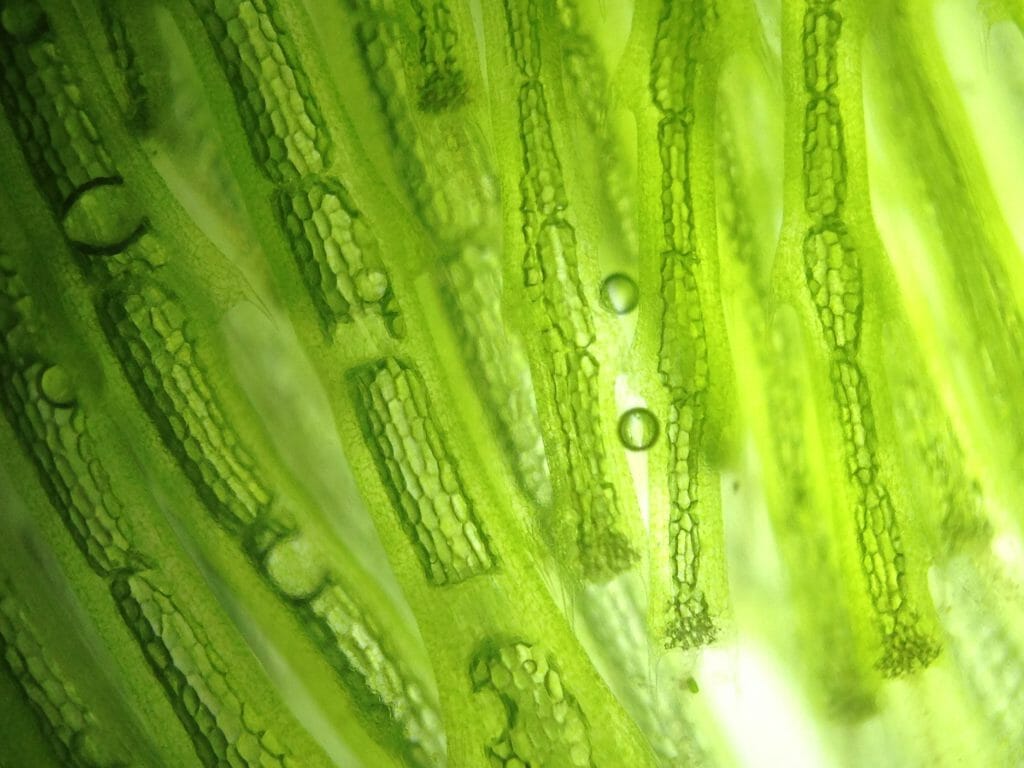 Algae as bioresource in circular bioeconomy

In the scope of circular bioeconomy and bio-based resources, algae seem to fit perfectly into the picture. On one hand, their biomass is full of macro and micronutrients as well as interesting pharmaceutical compounds. On the other hand, they can be easily cultivated in a wide variety of wastewater and waste streams, treating and cleaning the water as they grow. In addition, they get rid of a nasty wastewater odour and sequester carbon dioxide to produce oxygen.

Algae have a huge potential as the bioresource for food, animal feed, chemicals, and materials. While macroalgae are currently mostly produced in the sea, microalgae are the ones cultivated on land. But don’t be alarmed. One of the great things about algae cultivation is that they don’t compete for the agricultural land as some other crops used for the biofuel production. They can be cultivated in a desert or degraded areas, unsuitable for any other use. And anyway, they don’t need so much land in the first place. Comparing their production with the agricultural crops, microalgae can produce 4–15 tonnes of protein per hectare per year while soybean usually reaches 0.6–1.2 tonnes (van Krimpen et al. 2013).

Large-scale algae biomass production mostly takes place in (photo) bioreactors or raceway ponds. Bioreactors can be installed indoors for the rapid biomass production of specific ingredients, for example pigments. They can also be used outdoors and installed vertically to enhance the yield per land area. Because they are a closed system, algae can be cultivated there in the fairly sterile conditions.

Raceway ponds are open systems and thus more prone to environmental impacts. They provide quality biomass nevertheless and at the same time require much lower initial investment and maintenance costs. They can be completely open or placed in the greenhouse, the later for the purpose of continuous production in the sub-optimal climatic areas (i.e. winter season in continental Europe). Spirulina (Arthrospira platensis) for food is produced in this way. Raceway ponds also allow relatively simple production of biomass in the waste streams, from municipal wastewater to anaerobic digestate from the biogas plants.

Several other cultivation systems are researched and developed in hope to achieve even higher production. Thin-layer systems, biofilms and algal turf scrubbers are some of the many innovative and promising production systems developed around the world.

Algae for food and animal feed

Algae are rich in proteins, lipids, amino acids, vitamins, pigments and other beneficial compounds. They typically contain essential amino acids, essential fatty acids, including omega-3, omega-6 and omega-7, as well as vitamins A, B, C, E and K (see FDC data for Spirulina). Proteins can amount up to 60% in some species, similar to soybeans. People living in the coastal areas have been aware of their benefits for thousands of years and included seaweed in their diets for nutrition. Seaweeds are still an important food source in many countries, typically Asian. In the light of rising awareness about the benefits of algae, seaweed production is currently rising also on other continents, including Europe.

Microalgae consumption is not yet so common, but the case for using them as the food source is compelling. Currently, microalgae from two genera are prevailing in the food sector: Chlorella and Arthrospira, more widely known as Spirulina. Microalgae are rarely consumed fresh (mostly to the logistic and conservation issues) and are mainly available in the dry form as tablets, powder or flakes. Algae are already a part of the fish diet in aquaculture and they are extensively studied as the feed additive for pets and farm animals that could lower the need for the use of antibiotics. Many other microalgae are being studied as the food source, forces being put mainly into developing productive and cost-effective mass cultivation and harvesting techniques.

It has been estimated that there somewhere from 30.000 to potentially 1 million algae species in the world (Guiry 2012). They are extremely heterogenous and thus represent a huge genetic pool of various compounds, some of which have already been known for a very long time (f.e. agar and carrageenan). They can be used for production of agricultural biostimulants due to their hormone content. Biopesticides derived from algae are gaining in importance as well in the scope of European Green Deal goals and Farm to fork strategy.

Algae extracts contain active substances like carotenoids, chlorophyll, fucoxanthine, fucosterol, squalene, mycosporine-like amino acids, and more, all known as strong antioxidant agents. They can have pigments like lutein, a known carotenoid beneficial for eyes (also known as “the eye vitamin”) which also protect the skin from damages caused by UV radiation. Another perspective antioxidant is ulvan, polysaccharide extracted from the sea lettuce. Various algae contain a lot more bioactive compounds which are important for skin care, sun protection, and other care products.

Algae and their extracts have a long tradition of being used in the agriculture as the soil conditioners and enhancers of crop productivity. The benefits of algae application on the agricultural field are numerous, such as stimulation of seed germination, enhancement of growth (shoot and root elongation), improved water and nutrient uptake, frost and saline resistance, biocontrol and resistance to pathogenic organisms, fertilisation and remediation of contaminated soil. Adding algae to the soil also improves its water holding capacity and structural characteristics as well as compensates for the deficiency of nitrogen, phosphorus, potassium and other minerals. The beneficial effects of algae in agriculture, especially higher crop yield, are being reported in numerous research publications.

Algae can importantly contribute to the 2030 targets for sustainable food production as their application in the agricultural production significantly reduces the need for the use of chemical pesticides and mineral fertilisers as well as the need for antimicrobials use. They are also a perfect candidate to support the organic farming if used together with the advanced agricultural approaches, like crop cycling and conservation farming.

Algae can be used for production of biogas, bioethanol or biodiesel. Their biomass can be used for production of electrical power in biogas plants. The components of cell wall and storage sugars can be used to produce bioethanol and the lipids can be used to produce biodiesel. The reason for limited utilisation of algae for biofuel is simple: the cost is still too high and can’t compete with fossil fuels in current market. One way to lower the costs is algae cultivation in wastewater, which is by far cheaper as cultivation in the pure chemical media. Another trend-line is co-production of biofuel with higher value products (phyto-pharmaceuticals for example) or animal feeds. In biorefineries, components of algal biomass can be utilised for many different purposes, from lipids for biofuels and proteins for animal feed to extracts of interesting bioactive compounds, like pigments, vitamins or agar.

Algae systems present attractive opportunities for multiple industries because they can grow in most wastewaters as long as they are not toxic. They recycle nutrients that would otherwise end up as pollutants in the natural environment. Algae take up carbon, nitrogen, phosphorus, and many other minerals and metals, and turn them into valuable biomass. Biomass can than be used as a secondary raw material for the production of many new products: from low-added-value biomaterials, biofuels and biofertilisers to high-added-value substances like pigments, proteins, lipids, biopesticides, agricultural biostimulants or bioactive compounds for cosmetics and pharmaceuticals.

The systems can be seamlessly added to the existing technology as side-streams, thus not requiring restructuring of a current installation, be it in the wastewater treatment system of the sewage plant or in the industrial technology systems. An addition of algal raceway pond can complement or even replace the secondary and tertiary treatment of wastewater, substantially reducing the production of unwanted sludge (not allowed to be agriculturally used in many countries). Algae can be also utilised to stabilise the liquid phase of anaerobic digestate, for example in the biogas plants, significantly cutting down the storage and transport logistic costs and greenhouse gas emissions.

To conclude, algae have a lot to offer and we’re happy to see the technology advancements and research of different species that will make all the discussed possibilities spring to life.

You can find out more about which cookies we are using or switch them off in settings.

This website uses cookies so that we can provide you with the best user experience possible. Cookie information is stored in your browser and performs functions such as recognising you when you return to our website and helping our team to understand which sections of the website you find most interesting and useful.

Strictly Necessary Cookie should be enabled at all times so that we can save your preferences for cookie settings.

If you leave a comment on our site you may opt-in to saving your name, email address and website in cookies. These are for your convenience so that you do not have to fill in your details again when you leave another comment. These cookies will last for one year.

If you visit our login page, we will set a temporary cookie to determine if your browser accepts cookies. This cookie contains no personal data and is discarded when you close your browser.

If you edit or publish an article, an additional cookie will be saved in your browser. This cookie includes no personal data and simply indicates the post ID of the article you just edited. It expires after 1 day.

These cookies are strictly necessary to provide you with services available through our Websites and to use some of its features, such as access to secure areas.

If you disable this cookie, we will not be able to save your preferences. This means that every time you visit this website you will need to enable or disable cookies again.

This website uses Google Analytics to collect anonymous information such as the number of visitors to the site, and the most popular pages.

Please enable Strictly Necessary Cookies first so that we can save your preferences!